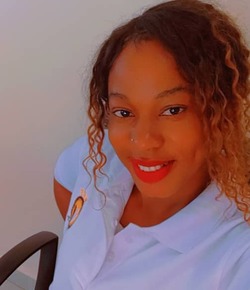 My Name is Nambusi Mary, born 25th September 1992, my father is a staunch Muslim which allows to have many wives, my mother is the first woman my father married, when my father got other women his love for my mother changed and he started mins treating my mother and they would almost fight on a daily basis, whenever my father beat my mother after he would turn to me, in a way of protecting me my mother decided to take me to my Auntie as a way of protecting me from my violent father, my Auntie was an an HIV patient after 5 years she also died, after the death of my Auntie I was forced to go to an orphanage, which raised me up to My A level after my a level one day on my way to the university to pick forms, I was raped by some boys and they ran away good enough when I went to the hospital and they found I had no AIDS little did I know I had got pregnant, in 2012 I had my my first daughter Isabelle, life was so hard for me as a single mother with no income , with Gods favor I got a job in the same orphanage that raised me and I started looking after my daughter and me, when my son was 3 I got a man who told me Heaven on earth and promised to love me and make me forget my history, we spent 3 years together and had one son called praise. It's so heartbreaking that he left me one day home and didn't come back and even denied to father my son, life came back to a standstill , I was so heartbroken and it's like God had forgotten me, one day I almost took my life but would always say where will my children go.one day when I was moving near where I stay I found a baby girl thrown in a bush and crying I felt so bitter and I remembered my past and how God has rescued me, even though I had 2 children of my own with no father I decided and to him up, I named her Kendra and she is now 15 months and my family has kept on growing now I look after 45 children with my little salary and with also the help of friends, My Vision, Is to make sure this children grow into responsible citizens and impact other children and we create a better world.

Iam a committed social worker with a zeal of working with the unfortunate Orphans, street kids and youths in Uganda,I saw people get murdered and raped. Often kids would do stuff when they were high not realising the consequences of their actions. It was not safe, but it was home and they were my only friends.’ Mary lived as a street child on the streets of Kampala for five years and explained to us that life certainly wasn’t easy. ‘Finding a cardboard box to sleep on, stealing bags to get money for food, and hiding from the government who hunt children down and put them in a prison for children were just some of the worries of living on the street.’ This is something that we witnessed first-hand when Mary took us to see where he used to live. Boys and girls as young as four were walking around, dirty, deprived and lost. Children as young as 7 were high from sniffing glue; they grabbed you, hugging you and pleading for money. So many children. Too many children. For us it was an exhausting, emotional and disturbing experience. For Mary this was life and he was pleased to catch up with some children who she used to live with. Life as a street child in Kampala was difficult so when the opportunity arose for Mary to sleep in a nearby church he seized it. This of course was not a long term solution so Mary found a job as a Cleaner and soon could move out of the church and rent her own room near the streets. ‘It was a small room, with no furniture or bathroom, but it was mine so I went to get my two best friends from the streets to say that they could stay with me. When people saw me they were surprised at how much I had changed.’ Mary went to work the next day but when she arrived back there were 12 children sleeping in his room. ‘I realised then that I could be an example.’Mary had to limit how many were allowed to stay there and established her own house rules (no smoking, drinking, drugs etc) as well as starting to sponsor some of them through school.Maryknew then he needed a bigger room- he needed to save to rent a house. Fast forward to 8 months ago and Mary was renting a house that was housing 98 street children, and Marles children's Foundation Uganda had been born. Paying for the children to go to school and finding sponsors was proving too difficult so she hopes to start a kindergarten of her own called ‘A-Z nursery’, teaching around 90 children, aged 3-7, from around the community. On top of this Marles Childrens Foundation ran counselling sessions, support to get off drugs, a football academy (as when children are good at football they can get into a school for free!) and organized break dancing classes. 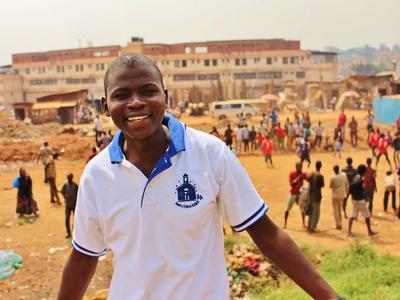 We need helpful volunteers to work with street kids and Youths

The project is amazing and has a great positive impact on the lives of the people being served. Charles and his family welcomed me very well. I highly recommend this project.

Great experience! I can get just thank Charles (director), his family and the entire organisation for every day learning and caring. Uganda is a great country and its people just make it awesome! BOLI has a great purpose of helping street children and a great project of rehabilitating them so can be fitted into society again. I had a chance of experience it as close as possible, by visiting slums, doing outreaches, writing fund proposals and leaving into a traditional african family. This experience opened my mind to everything and made me set different priorities in life. Thank you BOLI!