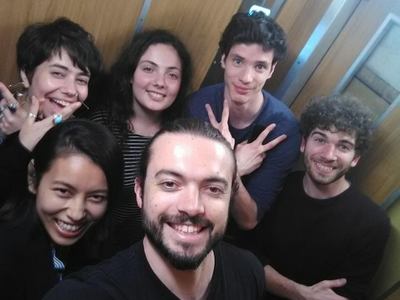 This was a very positive experience!
I recommend it.

Great experience!! Great and friendly guests!! I could work and enjoy the city at the same time!
Work is easy and the schedule is very flexible, The hostel is located next to metro station and you can do a lot things walking.
Balazs is a great host and gives all the support needed.
I would absolutely recommend this experience!!!

Thank you Marcia!!! Amazing experience for us too! Thanks for everything!

La Boheme was my first experience as a volunteer and I am glad for it. The hostel keeps itself in the origen of what a hostel should be (at least for me): alternative, but comfortable, peaceful and well located. Bálazs is a very welcoming and fun host. He's opened to ideas and suggestions, and also gives you all info needed to visit Budapest. While I was there, he promoted two typical Hungarian dinners, which were very nice. The tasks are easy-peasy, you have plenty of time to relax and visit the city, and you get to meet very nice people at the hostel. I'd definitely recommend La Boheme.

Thank you Fernanda!! :) Hope you guys are well in Asia now! :) And hope to see you one time again!

it is a great place & overall I had fun volunteering at La Boheme, Budapest. The hostel is small and quiet with a good kitchen setup and all basic amenities. The rules are clear, with 5 hour shift 5 days spread over a week, we have plenty of time to explore the city. Balazs is a great host & ensures that you are all setup before you start your first day. He was very understanding and cooperative through my stay. Although one volunteer was friend of the host, he acted as a supervisor authority even though it shouldn't be like that. Apart from that, overall it was a great experience.

My first experience as a volunteer has been really good. the work is simple and the atmosphere pleasant. The hostel is very well located near shops and restaurants. you can reach the danube and the center of the city walking as it is very close. I have shared work with a good group of people. Thanks Balasz, Bradley, Roger and Josie. I recommend the experience honestly. We have been a family.

OK well i will not come back, feeling was not here, if you like real energy and cool vibes find something else, if you dont care and just want to work for free i guess you can enjoy. The plus is that is a quite place at night.

Typically the case when everyone goes the opposite way on the highway, maybe its not all of them but you who are heading the wrong way.

both of the other volunteers (his team-mates) are staying longer as it was planned before.

here you can see a video where our paying guests all mention good atmosphere and that staff was great:

Brieuc says feeling was not there, we felt the same about him, but there was a reason for that, and that reason was himself.

he killed the vibe arround him.

others were complaining that he was uncooperative, sometimes rude or agressive, he didnt seemed caring too much, neither for the work or other people (he did the work on an OK level-we controlled that seriously-but others felt they had to do extra work after his shifts), but never told anything to the manager that he has any problems, even when we asked him, he said all was fine.

we never asked him to work outside of the hours we dealed about, and the work he got was super easy and relaxed.

we, all the staff members dealed about making dinner for each other, Brieuc accepted the idea, took all the invites for food and ate with us every single time but never gave a response and stayed silent about it. not too cool :(

that is the corner of him.

i didnt wanted to make him to leave (others were asking me to do that), but tried to solve the issue, with words and conversations. seems it wasn't succesful. We are soo unhappy to finish like this.