About COVID-19
Due to the COVID-19 pandemic, we recommend you to stay informed about WHO's and local authorities' recommendations.

Exchange your skills for accommodation

Hosts that have good ratings and receive many worldpackers

Opportunities for couples and pairs

Hosts that welcome couples or two friends traveling together

Purpose of the trip

How do you help

Hours of collaboration per week

Find amazing hosts to stay on your trip to Amsterdam, Netherlands 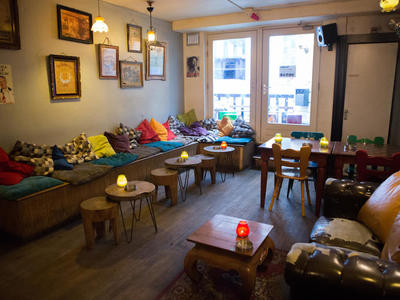 Come help us at the Pig and enjoy Amsterdam :)

In which country is Amsterdam located?

Amsterdam is a city in the Netherlands, sometimes also called Holland. The country’s official name is Kingdom of the Netherlands. Holland comes from the names of the two provinces: Noord and Zuid-Holland. However, the name Holland is often used to refer to all of the Netherlands. Dutch is the official language, but 94% of the population speaks English as a second language. Since it’s part of the European Union, the currency is the Euro. The population of Amsterdam has reached more than 2 million people in the Metropolitan Area.

How to travel Europe on a backpacker's budget

What should I know before traveling to Amsterdam?

Amsterdam is a culturally rich city. From the street fairs, flea markets and parks to the Theaters and around 75 Museums, there’s always things to do in Amsterdam. In Amsterdam’s nightlife you will find all kinds of bars, clubs, and of course coffeeshops. Many tourists are curious about the Marijuana Policy. The so-called gedoogbeleid (literally "tolerance policy") has been actively applied since late 20th century. Basically, while the use, possession and trade of non-medicinal drugs are illegal under Dutch law, the official policy has been to openly tolerate all recreational use while the other two will depend on specific circumstances.

How to take a sabbatical: top 10 tips and more

Top places and tips to travel alone in Europe

Can I go to Amsterdam using Worldpackers?

Yes! At Worldpackers you will find hostels in Amsterdam where you can exchange work for accommodation! You can make a profile for free. The profile should include your skills, photos of your travels and a description about yourself. You can also check our host list for free. Once you find a host that matches you, book a trip by becoming a member of the Worldpackers community.

How Worldpackers works: the complete guide
Time to prepare for your trip as a worldpacker!